Lessons from Hardwick: Bringing a local eco event to life 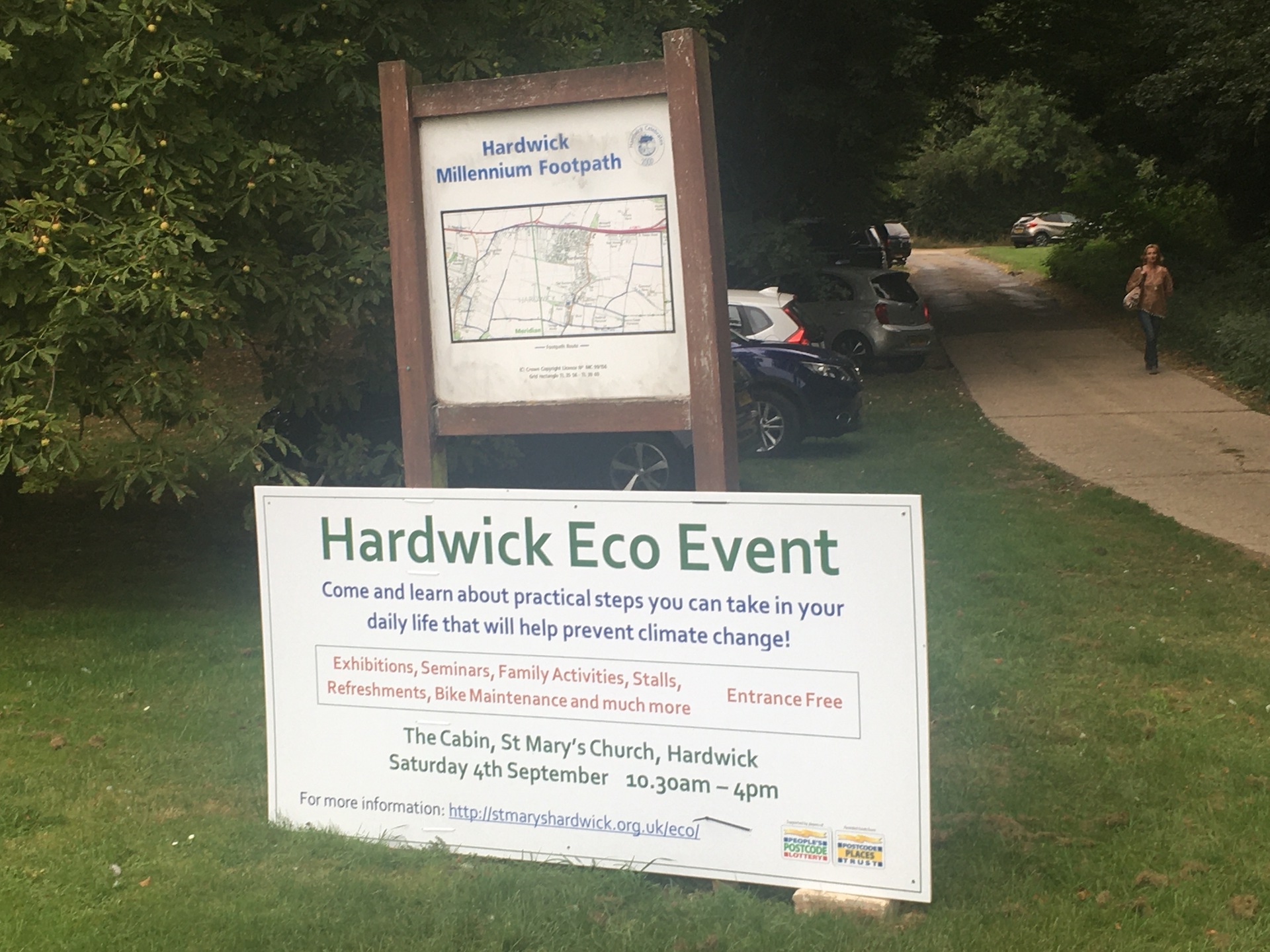 [vc_row][vc_column][vc_column_text]Hardwick’s inaugural Eco Event took place on Saturday 4th September in and around the new Cabin building and St Mary’s church. It resulted in a screening of David Attenborough’s ‘A Life on Our Planet’, 27 stall holders and 9 speakers, providing information and enthusiasm on a wide range of sustainable ideas:

A few of the stalls were inside the Cabin’s main hall but most were outside under gazebos. The speakers were in the church deliberately away from the stalls so they could be heard and the audience could sit in relatively safe Covid isolation: 4 in the morning and 5 in the afternoon. Each talk was 10 minutes with 5 minutes for questions. The film was also screened in the church as it shared the same AV equipment as the speakers. Permission to screen it was obtained by registering the event at the David Attenborough website. Those who watched it found it moving, shocking and inspirational.

Sustenance was provided with teas and coffees and delicious home-made cakes and a campfire heating a very tasty cooked lunch made from locally produced food.

How did it happen?

Planning started in December 2020 during lockdown as a joint project between St Mary’s Church Hardwick, Hardwick Evangelical Church and the Hardwick Climate Action Group, with the aim to highlight what is being done to help the environment and to increase awareness of the need for further action, particularly locally.

A steering committee was formed of about 8 representatives of the three organisations under the very able chairing skills of Peter Cornwell. Regular monthly meetings were held, initially via Zoom and then face-face outside the Cabin when lockdown was eased. These generated ideas and actions and devolved responsibilities for organising the food, stalls, refreshments and speakers. From July the meetings were every two weeks, with progress and commitments being reported.

Potential speakers and stallholders were mainly identified by local knowledge and word of mouth. Many of the speakers were recommended by similar groups in the Cambridgeshire Climate Emergency Community Organisers from nearby villages.

On the day each attendee was welcomed by one of our younger volunteers. This turned out to be very important as attendees immediately got a feel for how friendly and positive the event was and could ask all their initial questions about the event. Printed copies of the programme were available detailing talks, stalls and events. A QR code was also made to be scanned by mobile phones to access the website version of the programme.

The following Sunday a joint service of the two churches was held outside the Cabin where prayers were made to reaffirm commitments to be more sustainable.

Attendance was identified as a major risk, which also made planning for refreshments difficult. We aimed for 100-150 people, but we had no idea really how many people would turn up. This made planning for food and drink very hard. It was vital that as many people as possible attended the event, otherwise there’s not much point organising it. Hence a major part of the planning was devoted to publicity.

Expected costs were identified for publicity (a leaflet drop to every house in Hardwick, posters in nearby villages and a large sign outside the church) and a small grant applied for and awarded by the Peoples’ Postcode Lottery and the Postcode Places Trust. Admission to the event, food and refreshments were free but donations were encouraged. A programme was produced about a week before the event and posted on the event’s website, Facebook page and in email shots (including all parents of school students) and two messages were sent via the Nextdoor app covering about 12 surrounding villages.

As well as the paper publicity, articles were posted in the Hardwick Happenings (the village’s monthly newsletter sent to every house in Hardwick), on the Hardwick group’s Facebook pages and email shots to various village mailing lists. Word of mouth was also vital, with door-knocks, friends and family and schools encouraged to spread the word.  This resulted in 266 attendees on the day (about 9% of the Hardwick population) with some coming from nearby villages and Cambridge.

All the speakers were thanked after the event and their feedback requested, which was very positive:

The post-event wrap-up of the steering committee took place a few days later and identified the above challenges.

From the donations received for refreshments it was resolved to reimburse some of the stall holders who had significant costs.

During the event we were approached from representatives of nearby local groups (Toft, Waterbeach and Oakington) to collaborate if possible. We agreed to share our expertise and experiences on hosting an Eco Event. For future events, perhaps local villages could run events on the same day as us – we could then share speakers and resources. We were reluctant to do joint events with other villages as it is unlikely as many people from Hardwick would travel to another village, so Hardwick might lose potential attendees.